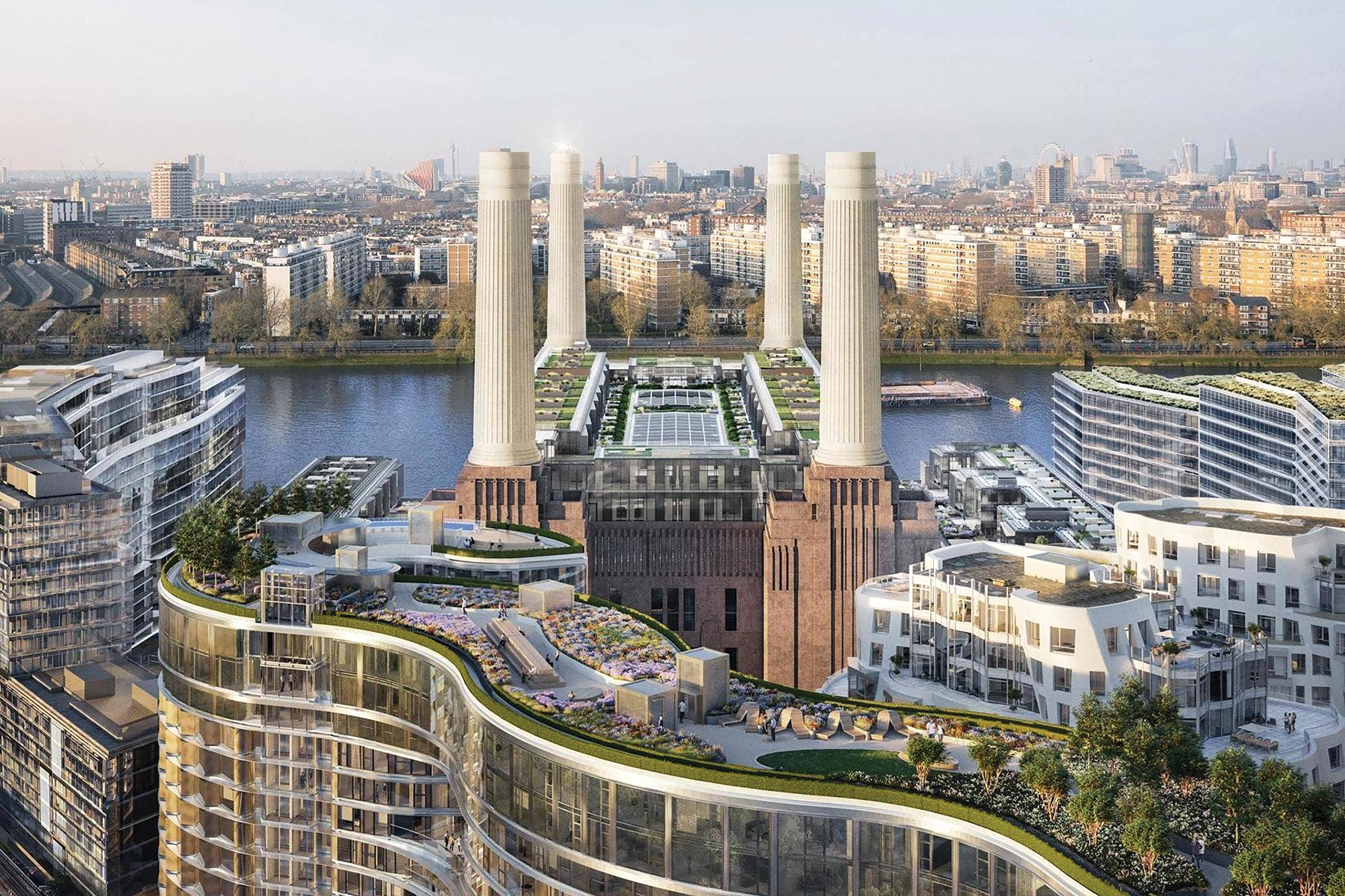 After 2020 and 2021 were years that nobody in the industry could have predicted, many viewed 2022 as the perfect chance for a reset. However, not only has Covid-19 remained an important factor in the world of retail and leisure, new challenges have also appeared to make this another challenging year. Despite this, the market has remained resilient in the face of these obstacles and over the following pages RLI will highlight how recently opened schemes and those in the pipeline continue to give cause for optimism.

Battersea Power Station has recently announced a further wave of retail and leisure brands opening in the iconic Grade II* listed building and on Electric Boulevard, central London’s newest pedestrianised high street, from autumn 2022. Amongst the line-up of new brands announced today is Battersea Bookshop, a new standalone neighbourhood bookshop from specialist bookseller Stanfords. The unique concept will have a curated collection of art, architecture and design books, in a modern, minimalist-designed store to honour the history and architecture of its home within the Power Station. Following these latest signings, 85 per cent of the retail and leisure space inside Battersea Power Station is now exchanged or under offer, with the first stores set to start trading as the Power Station opens its doors to the public for the first time this autumn. Circus West Village, the first chapter in the regeneration of Battersea Power Station, is already home to over 1,800 residents and more than 20 bars, restaurants, cafés, fitness and leisure offerings while practical completion on the site as a whole was also reached recently.

Developer Argent Related has announced the sales launch of the first, highly anticipated homes at Brent Cross Town, London’s 180-acre, £7bn new park town. Overlooking five acres of open green space, The Ashbee and The Delamarre will together offer 277 new homes featuring timeless design and superior quality. The first phase of the development will include Claremont Park and a new parade of local shops, both set to open in spring 2022.

Construction is also underway on the new Brent Cross West station, with construction set to be completed by December 2022. The first phases will also include around 1,000 new homes for sale and rent, as well as affordable homes, up to one million square feet of offices, new sport and play facilities, shops and restaurants and a new primary school.

The £135M first phase of Copr Bay launched earlier this year and the £1bn regeneration of Swansea city centre is being developed by Swansea Council and supported by development managers RivingtonHark. The project is a mixed-use scheme that is a case study for how city centres can cater to the changing needs of people who live, work and visit them. It is anchored around a 3,500-capacity live performance venue that launched in March and features a landscaped coastal park with a 1,500sq ft café and pizzeria, run by Swansea-based, family-run The Secret Hospitality Group. Copr Bay phase one also includes 8,000sq ft of other F&B space encompassing a range of independent cafés, restaurants and shops, as well as new affordable housing. Copr Bay phase two and further regeneration projects including office, retail and leisure provisions are ongoing.

Borough Yards is a new dining, shopping and cultural destination in the heart of medieval London. Situated in the London Borough of Southwark, next to the vibrant Borough Market, Borough Yards is bringing new life to an area rich with history. Continuing to open in phases throughout 2022, the project features five mixed-use buildings including Grade-A workspace, retail, gallery, restaurants, cinema and creative spaces. The high-quality public realm scheme will restore and reinvent the lost medieval street pattern of the area adjacent to the world-famous food destination Borough Market. Restoring and rejuvenating an important part of south London’s Victorian railway heritage, the landmark scheme will also re-purpose 8,500sq m of existing railway arches, creating 50 units for retail, food & drink and leisure brands to use as their canvas to create and innovate. The architectural design weaves together historic fabric with contemporary architecture and new public spaces, opening the site to its Bankside context and bringing new pedestrian routes and amenities to the area.

Paddington Square is the centrepiece of Paddington’s regeneration, a new working, shopping, dining, and cultural quarter created by world-renowned architect Renzo Piano and Shard developer Sellar, in partnership with Hotel Properties Limited. At its heart is a light-filled crystalline building providing 14 floors of workspace incorporating wellbeing and sustainability features and smart technology, 80,000sq ft of shops and restaurants will serve the area’s 55,000 worker population, a projected 113.5 million commuters and an untapped affluent residential catchment. Seamlessly integrated with London’s Paddington Station, a landscaped public piazza with specially commissioned artworks forms part of a new and improved station arrival experience, whilst a new Bakerloo Line ticket hall directly below the offices, connects a contemporary mix of 40 shops and restaurants. Paddington Square is scheduled to complete over a number of phases; the main office building will complete in early autumn, with the 40 retail and dining spaces, public piazza and new Bakerloo Line ticket hall opening in early 2023.

Under development by Canary Wharf Group, Wood Wharf is the latest chapter in the transformation of the historic West India Docks. Once part of the world’s busiest port during the 1800s, it now welcomes 120,000 office workers every day. The docks closed in 1980, and over the past 40 years, the district has become one of Europe’s largest centres for finance, business and tech, with more than 16 million square feet of office space. Expected to be completed by 2023, the scheme is to be a new London neighbourhood that is being created for the curious, the imaginative, and the challengers of convention. It will be a place to inspire creativity and collaboration, designed for people shaping the future of one of the world’s most exciting cities. The upcoming development will include two million square feet of work space that is being designed by some of the world’s leading architects, five million square feet of office, residential, retail and educational uses and up to 4,000 new homes including up 25 per cent affordable housing, 350m of waterfront walks and 350,000sq ft of hand-picked retailers and leisure space.

Scotch Corner Designer Village is set to be the leading outlet and leisure destination in the north of England and it will serve an affluent shopper profile with a high volume of residents and tourists in a very accessible location in the UK’s number one tourist region outside London. Being developed by Scotch Corner Richmond LLP and set to open in autumn 2023, the scheme comprises 150,000sq ft of retail space and will feature 80 boutiques, restaurants and cafes in phase one. In addition, the site will be home to the UK’s largest Blue Diamond lifestyle, home and garden, which is already fully let and will encompass 160,000sq ft. The scheme is also a leisure destination with extensive landscaping, unique food offering, children’s and adult activities, restaurants and interactive experiences, dog walking and bike riding routes. The investment in Scotch Corner Designer Village is £100M for the first phase and will feature premium brands and restaurants including adidas, Hugo Boss, Skechers, Tommy Hilfiger, Calvin Klein, Joules, Dune London, Five Guys and wagamama.

When completed in 2024, Grantham Designer Outlet Village will be a state-of-the-art retail destination that will transform visitors’ shopping and leisure experience. It will be the UK’s only premium outlet with a visible frontage and direct access from the UK’s 3rd busiest highway (A1). Inspired by the surrounding countryside, its buildings are conceived as traditional forms with contemporary finishes and high-quality shop fronts. Under development by Rioja Estates, the Grantham Designer Outlet Village will offer a uniquely stylish retail and leisure experience for shoppers and tourists alike. Phase one will consist of 89 units with an area of 193,680sq ft; phase two will add a further 94,809sq ft and 48 units. A choice of dine-in or grab and go eateries, combined with an array of premium fashion and lifestyle brands along with landscaped areas for relaxation and children’s play, make Grantham Designer Outlet Village the ideal day out destination.

Easily accessible by car and public transport, the scheme will also boast a VIP shopping lounge and relaxation areas to offer a premium shopping experience to guests who are members of its loyalty scheme.

A £2.5bn regeneration project on London’s South Bank, Bankside Yards is the first major mixed-use estate in the UK to be fossil-fuel-free. With sustainability and wellness at its core, the project brings residential, offices, retail, leisure, a hotel and cultural space to a strategic brownfield site, alongside several acres of new public spaces which support biodiversity.

Stunningly designed new buildings nestle with historic railway arches, which will be restored and fully accessible. This will mean that for the first time in 150 years, London’s South Bank and Bankside will be connected, creating a continuous cultural strip along the Thames. Currently set to complete in 2024, the project is being developed by Native Land and it is set to become London’s definitive cultural neighbourhood.

From a desolate outlet on the periphery of a small town to Ireland’s most exciting retail destination, Lotus Property (LP) has significantly transformed the retail experience at The Boulevard at Outlet Park. Once cited by visitors as “the coldest place on earth” a bold vision to become the most exciting retail destination in Ireland was executed by reshaping the mall, improving landscaping, securing an exciting portfolio of retail, F&B and leisure names and investment in strong onsite experience. Bolder still, was the 2021 development of the 251,600sq ft of commercial land The Boulevard is situated in, Outlet Park, broadening the scope of The Boulevard’s shopping precinct and capitalising on the potential to draw even more visitor numbers on site through the jewel in its crown – the Game of Thrones Park n Ride facility, opened in February 2022. As international travel picks up this year and into next, The Boulevard is well positioned to become a world-leading retail and leisure destination.

Developer Europa Capital and its local partners, Core Capital and Oakmount, announced earlier this year two of the most important retail deals in the market in recent years. FLANNELS and H&M have committed to opening their Irish flagship stores at Clerys Quarter, billed as one of Dublin’s most iconic and exciting new mixed-use developments in the heart of the city. Due to open in Q4 2022, the development will reignite the vibrancy of Dublin’s landmark street, with an extensive food and beverage offering, to complement retail units and Grade A offices. Key to the redevelopment is the building’s historic features, including the colonnaded façade, internal staircases, columns and ceilings and the famous refurbished Clerys clock. Clerys Quarter is targeting LEED Gold and WiredScore Platinum certification and, once complete is expected to create around 400 new jobs in addition to the 750 construction jobs it is supporting during the works.

The Crossings will be a destination and a new vibrant shopping and retail environment to serve the affluent and growing catchment and put The Crossings, Adamstown on the map in terms of modern retailing. The first phase of The Crossings is to be delivered on a phased basis during Q1/Q2 2023 which will see 11,700sq m of retail space alongside 279 residential units. When fully complete, The Crossings, will comprise of 975 residential units, 18,000sq m of retail space and 3,500sq m of commercial uses to include a civic/library building, creche, enterprise centre and primary care facility. Under development by Quintain who are best known for the transformation of Wembley Park in London and the third largest developer in Ireland, The Crossings is being designed to be a truly mixed-use community with a 2-acre village green as the focal point for the area as a place to unwind and dine and to bring people together at events, artisan markets and family fun days.

Voyager – Latin America – A Region on the Rise 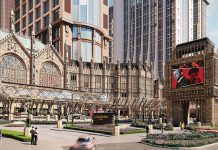 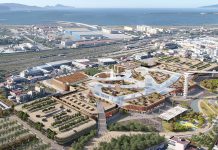