The largest country in the world by area, Russia spans more than one-eighth of the Earth’s inhabited land area, stretches across eleven time zones and borders sixteen sovereign nations. The country remains a beacon of retail in these difficult times as it continues to see ongoing change. Here, RLI will highlight some of the recently opened projects and a number of developments that are proposed in the country.

Before Covid-19, Cushman & Wakefield’s ‘European Shopping Centres: The Development Story’, suggested construction activity in Russia was expected to remain stable, with 1.4 million square metres of new space in the pipeline. In a departure from the trend seen in 2019, new projects in 2020 were scheduled to launch in Yekaterinburg, Perm, Grozny and Kirov, among other cities.

However, the effects of coronavirus are wide reaching and will have a toll on developments around the world for the foreseeable future. According to a report by Colliers International entitled ‘Retail Market Moscow, Q1 2020’ the beginning of the year and the current events have become a serious challenge for the retail real estate market. While 190,000sq m of retail space was commissioned in Q1 2020, which was one of the highest commissioning rates in the last five years, they expect a number of previously announced projects to be postponed to next year.

Nowadays, there’s a lot of talk about how the world is changing and how the retail industry has to adapt to new trends in order to survive. The idea of “meeting place” is a hot topic – but it’s not a brand-new concept. In this changing climate amidst Covid-19 and the ever-growing focus on sustainability, Ingka Centres, together with Ingka Group, we have created a sustainability strategy that by 2030 will allow them to run meeting places that will be more people and planet positive. Supported by the global resources of Ingka Centres, they have grown to be the largest shopping centre developer in Russia and its MEGA branded shopping centres are located in Russia’s 11 largest cities and welcome over 237 million guests annually. Given Covid-19, these MEGA centres are still closed, but they have continued to provide free home deliveries for at risk and elderly customers unable to leave their homes. Meanwhile in locations where malls have begun to re-open, Ingka Centres has vowed to invest €1.6M into community programmes to reunite local neighbourhoods.

Opened last year, SEC “Salaris” is a modern and convenient space for shopping and recreation, which has become a new point of attraction on the map of Moscow. On an area of ​​310,000sq m are located 290 stores of famous and beloved brands, 25 restaurants, an innovative cinema, a fitness class comfort club, beauty salons and other services that make your life more comfortable. Salaris is not just a shopping centre, but a place for inspiration, communication and emotional renewal. The project was designed by 5+design and developed by Essence Development.

Neighbourhood Centre Angara was the first of the Neighbourhood Centres to open its doors back in 2019. It belongs to the genuine Network developed by the ADG Group which is designed to revive public life in residential areas of Moscow. Located at the heart of the neighbourhood’s most popular promenade areas, Angara is a destination for families with children and they would be pleased to find new retail leisure and F&B experiences on offer on-site. The mall also focuses on local community engagement through its own mobile app which has an all-in-one calendar, a classifieds community board, a Neighbourhood bulletin and local news digest and a loyalty program with a bonus reward system for any purchase made in the centre.

Located on the outskirts of the second largest city in Russia, FASHION HOUSE Outlet Center St Petersburg is now delighting customers with its unique architectural concept which embraces the city’s cultural heritage with its new “Window to Europe” interior design and an interesting mix of brands. The construction of the outlet centre in St. Petersburg began in October 2018 and in total cost €52M. The centre has been built in the dynamically developing southern part of the city, 15 minutes by car from the Pulkovo airport and the Gorelovo railway station. FASHION HOUSE Outlet Center St. Petersburg has a catchment of over five million customers. The project, with a lease area of 20,330sq m offers its clients 120 stores of the world’s largest and local brands available all year round for 30 per cent to 70 per cent less than original prices. The opening of the centre was in the final quarter 2019 and was developed by the FASHION HOUSE Group, part of Liebrecht & wooD Group.

Shopping and entertainment centre Grozny Mall will be located on the left bank of the Sunzha river opposite to MFC “Akhmat Tower”. Grozny Mall will be the largest shopping and entertainment centre in the south of the Russian Federation that will have everything for best shopping and entertainment for citizens of the region and nearby towns. The new development is being design by Chapman Taylor and designed by SMART BUILDING LLC and will bring together new diverse national and international retail brands within a 132,000sq m. A hypermarket, a food court and restaurants will complement the retail offering, while leisure facilities will include an IMAX cinema and a children’s entertainment area. Underground parking will provide space for 1,200 cars and it is anticipated that Grozny Mall will create 2,000 new jobs upon completion. The layout design of the shopping mall is highly-efficient and represents the typical plan of the visitors’ circulation with a maximum length of the shop-windows and wide view. Small cafes and a public zone for execution of events will be located on the adjoining to the mall embankment when the project launches later this year, if the original plan can be adhered to given the effects of the coronavirus.

The upcoming Planeta Perm project, which is being developed by MallTech and designed by Sonae Sierra, is set to unlock a unique shopping centre experience on an 83,000sq m GLA site that can house 185 stores. Sonae Sierra Development Services was recently commissioned by MallTech, one of the main shopping centre developers in Russia, to design what will become a super-regional mall in Perm Krai in Russia, Planeta Perm. MallTech and Sonae Sierra are working closely together to tackle this challenge and deliver a best-in-class product for the surrounding community, the centre’s visitors, and tenants. The city of Perm is known as a gateway to the Urals, on the crossroads of Europe and Asia. With a population of 2.6 million people and a catchment area of 915,000 potential shoppers, the final agreed brief was for a centre with 83,000sq m of GLA, 150,000sq m of GBA, 185 stores, and 3,600 parking spaces. The opening date has been slated for the fourth quarter of 2020.

Set to open this year is one of the centres of developer ADG Group’s long anticipated Network of 39 Neighbourhood Centres project. Neighbourhood Centre Budapesht is due to open its doors to the public sometime this year, although it must be stressed this may be affected by the coronavirus. The Budapesht site in Moscow is dedicated to revive community life within the capital residential areas. It will unite best practices of Angara and be supplemented with wider daily needs. Being redeveloped by ADG Group, Budapesht will once again become a modern meeting space that encourages interactions between neighbours. The brand new Neighbourhood Centre Budapesht, as a part of the Network is to be realised with the same architectural style by Amanda Levete Architects (AL_A)m and concept features. The centre includes a genuine mix of essential functions and services, a single transparent foyer set within iconic architecture, a highly flexible set of premises with full open fronts and free public spaces.

Completed in 1900, the Moscow Paveletskaya Railway Station was originally conceived as part of an ensemble – railway station, city square and ring road. Future reconstructions enlarging the station to six times its original size, took measures to preserve the station’s ornate architectural style and square skyline, but did nothing to preserve the civic space that accompanied it. Now, designers 5+design on behalf of client developer Mall Management Group are working to complete Paveletskaya Plaza by summer next year. Located adjacent to the primary entrance facade of the historic Moscow Paveletsky Railway Station, Paveletskaya Plaza is a project informed by its context. Following strict municipal guidelines enacted to protect views to the railway station, Paveletskaya Plaza functions as part urban park and part retail centre, codifying its historic and modern surroundings into a richly unified, multi-purposed environment. The new design re-establishes a lost connection between the historic railway station and Moscow’s Garden Ring Road, through the creation of a new plaza and a two-level shopping centre below-grade. Across multiple levels, Paveletskaya Plaza’s retail, lush landscape, programmable plazas, and event terraces will work together to provide a wide range of offerings and enhance the experience of the area’s many travellers, commuters, and expected visitors.

Anglo-Russian practice Twelve Architects has won planning permission for a £120M mixed-use development in the Russian city of Perm, around 700 miles north-east of Moscow. The 152,000sq m development features a shopping mall, an art gallery, a conference centre and a 175-bed hotel. Twelve said the scheme, created for client developer Prospect Perm, sought to create a “distinctive identity” and had taken its inspiration from the city’s culture of performing arts and civic sculptures to create a façade resembling the folds of ballerinas’ skirts. The practice said the move reflected the fact that the Bolshoi Ballet had once been based in the city and would create a piece of modern architecture that complemented the historic buildings of the district. The project is the landmark development within the overall regeneration of Perm’s Kama River Promenade and central Esplanade park. Construction of this phase will start later this year, and is scheduled to complete towards the end of 2021.

N.B. All projects mentioned are subject to changes in their development and opening dates due to the ongoing impact of Covid-19. 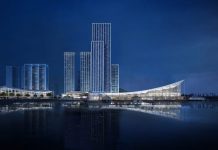 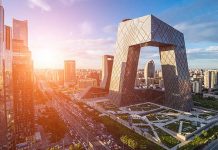 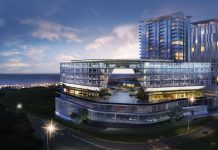 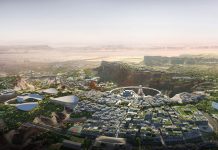 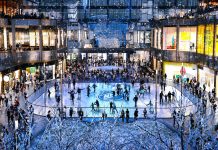